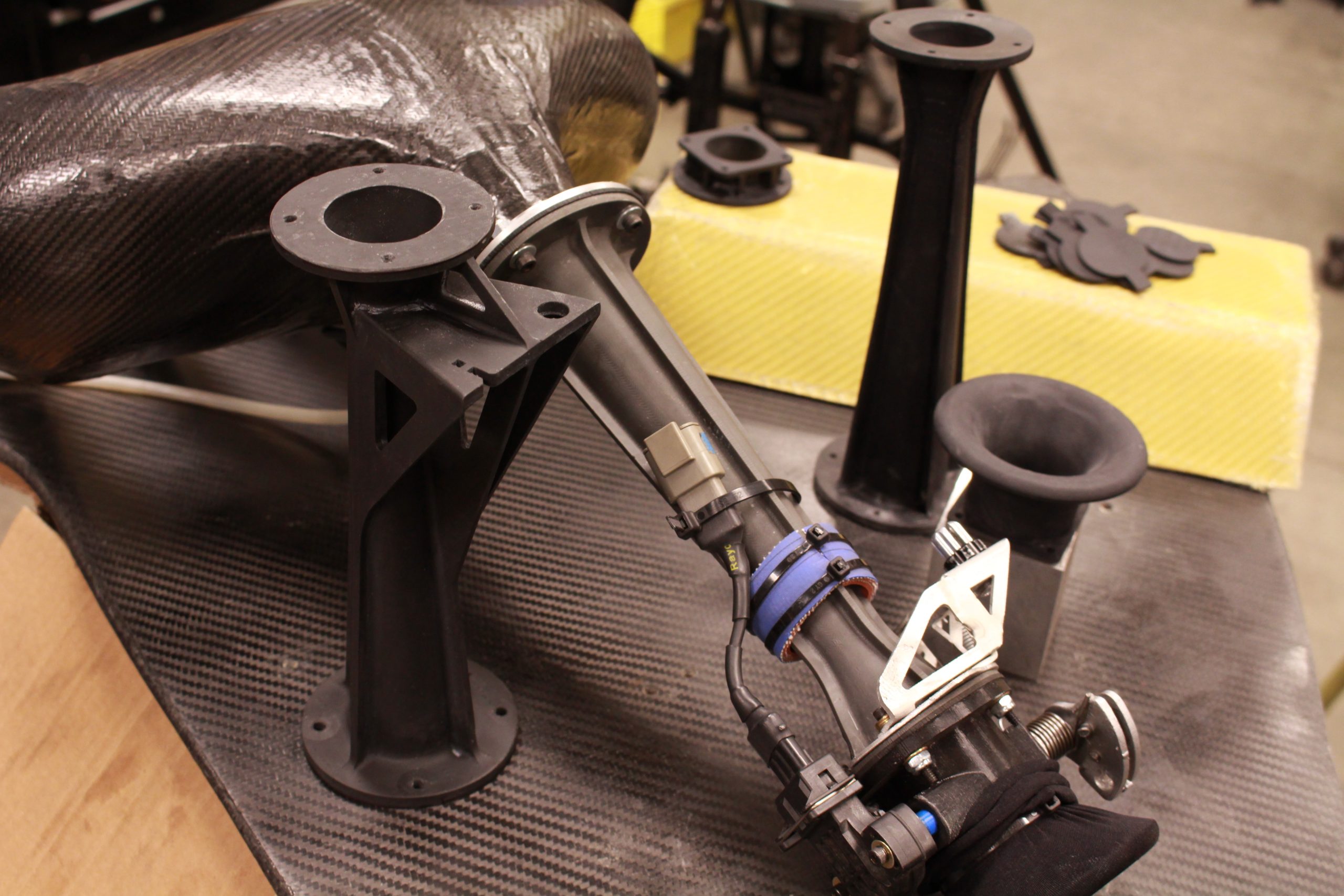 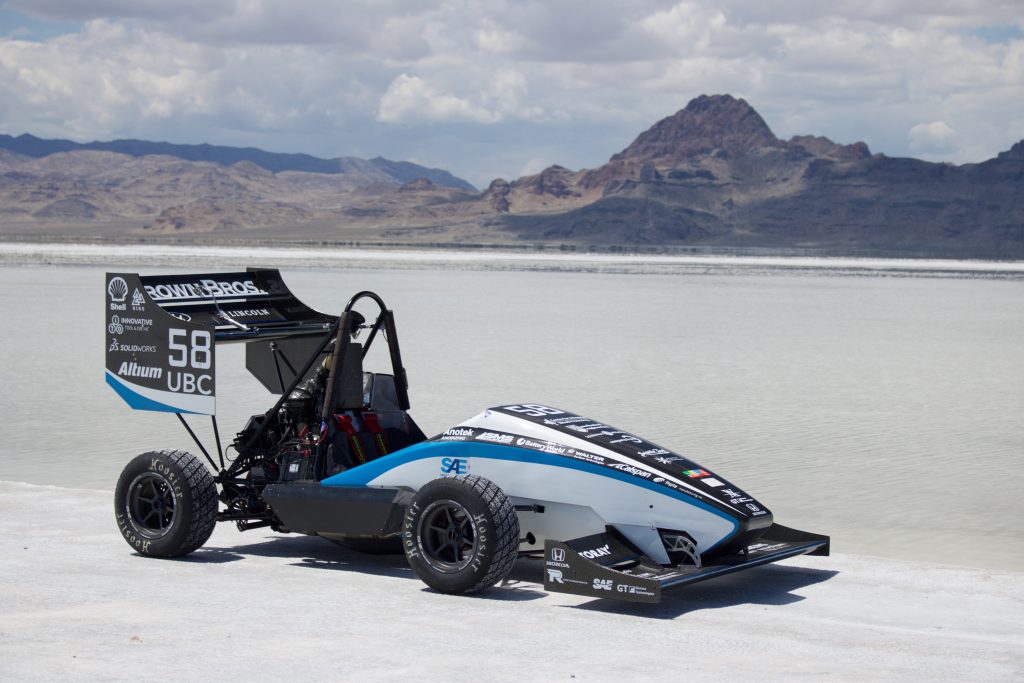 “In automotive racing, you either continuously improve, or get left behind,” says University of British Columbia student, team engine lead, and driver, Jerry Xiao. “In order to remain competitive we need to optimize every aspect of our car. The engine is the heaviest part of the vehicle. Anything we can do to make it lighter, or redistribute its weight gives us an advantage.”

Formula UBC Racing is a student engineering team that designs, builds, and races an open wheeled, formula style race car. Each year students build a new car from scratch. The team competes in the international Formula SAE (FSAE) Collegiate design series and has been active since 1991.

Over the past couple of years, the team at Formula UBC has been focused on improving reliability and refining their car’s subsystems through testing and validation, with an emphasis on addressing specific areas of weakness from previous years.

The team identified several engine parts that would benefit from a redesign. Working with 3D printing equipment supplier NewPro3D, FormulaUBC began investigating ways to leverage additive manufacturing to re-engineer how these key parts were produced.

Formula SAE is a student design competition organized by SAE International (previously known as the Society of Automotive Engineers, SAE). Based on a set of rules, students from each participating university design, build and test a prototype. The rules emphasize creative problem solving as well as on-track safety. The cars are judged in a series of events that evaluate their performance, in addition to their design, manufacturing and cost.

In September of 2018 a team of 52 engineering students from the University of British Columbia competed against 120 other university teams from around the world. The team at Formula UBC finished 43rd overall at Formula SAE Michigan in May of 2019. Due to the COVID-19 pandemic, they were unable to compete in 2020, however they did make several refinements to their car, in preparation for its next opportunity to compete.

Each member contributes his or her skills in a specialized area of interest such as powertrain, chassis, suspension, electronics, controls or aerodynamics. In addition to being one of the team’s drivers, Jerry Xiao is responsible for the car’s engine. It’s powered by a four-cylinder motorcycle engine and features several custom-designed engine subsystems including a custom air intake, tuned exhaust, dry sump lubrication, and cooling system.

“Like all internal combustion engines, ours runs on a mix of gasoline and oxygen. Enabling the engine to breathe more air can have a big impact on horsepower,” says Mr. Xiao. “However, as with many other racing formats, we’re limited by the rules as to how much air we can allow. Every car must include a 20mm restrictor plate, but there is some flexibility when it comes to how it’s designed and incorporated. We saw 3D printing as a way to improve tolerances to the point where they were exactly conforming.”

In the year prior, the engine team began experimenting with NewPro3D’s technology and produced two parts. The intake’s bellmouth was redesigned and 3D printed making it lighter than the previous machined, metal design. Also, a throttle mounting bracket was 3D printed, again reducing weight and improving overall performance.

For the 2019-2020 season, the team’s plans got more ambitious. First they redesigned the car’s intake neck and included a throttle cable bracket directly into the piece. In the past the part was machined and made from multiple aluminum parts. Using Loctite’s 3D 3843 material, they were able to additively manufacture a one piece assembly. To ensure the part would meet the rigors of racing, it was tested and the team found that it would withstand 30 pounds of pulling force in either direction without any measurable flex, making it more than capable of performing under stress.

Also this year, the team redesigned the car’s throttle valve. When flow testing they found that the old design was a significant barrier to peak performance. The previous part was also machined and used a screw and a round shaft to mount the valve. The limitations of this design made it difficult to achieve the tight tolerances that are needed for maximum airflow. As a result it was actually robbing the car of power before air ever got to the restrictor.

The new 3D printed design allowed air to flow more freely, producing more power and enabling the engine to more closely mirror its simulation models. Part of this was due to the design itself. But the assembly technique also contributed. Instead of using the screws and rounds shaft, they were able to adjoin the new throttle valve to a more efficient hinge, coincidentally using a Loctite industrial adhesive.

“Advanced materials like composites and plastics have helped us lower the car’s weight and redistribute it lower, closer to it’s center of gravity,” says Mr. Xiao. “But the combination of NewPro3D’s 3D printing technology and Henkel’s material have also helped us increase performance. Over two years, we’ve improved our intake system to the point where the engine is yielding significantly more horsepower and torque.”

“The design event at Formula SAE is significant,” says Mr. Xiao. “It makes up 150 of the total 1,000 available points in the competition. We’re excited to talk to the judges about our innovations with 3D printing, and especially our new air intake. We’re now operating at the maximum allowable efficiency. That’s not easy to accomplish.”

The design freedom offered by additive manufacturing was a key factor for Formula UBC Racing. Working with CAD and flow simulation software, they were able to generate designs that couldn’t be made with traditional processes. Working with NewPro3D they were able to prototype and test with end-use parts. They could conduct flow tests and force analysis in an operational environment, and have confidence knowing the parts would perform on the track.

3D printing also helped reduce the time and cost of building new parts. Typically the team receives a new rule book in November. They spend about six months designing and refining their car. In the past it would take weeks for them to be machined and finished. With NewPro3D’s assistance they were able to get two batches of parts in less than 10 days.

“From our perspective, it’s great to work with such a talented group of young engineers, says Gabriel Castanon,” COO of NewPro3D. They’re innovative, creative and motivated to win. We’re excited to help them on their journey while also validating opportunities in motorsports and across the automotive industry.”

Beyond the air intake system there are other opportunities for advanced materials and additive manufacturing. Right now the car uses an open floor design. While it is lightweight, it does not maximize its aerodynamics. Instead the team is considering a carbon fiber floor that will.

Further, the engine team is looking at how 3D printing might be used to improve the car’s dry sump lubrication system. The current oil pan is machined from aluminum, which suffers the same limitations as the older intake neck and throttle valve designs. An additively manufactured version would not only channel the oil more effectively, but also further lighten the car’s overall weight.

To learn more about Formula UBC Racing, visit them at https://www.formulaubc.com/